Appaloosa's opened its first bank and investors from all over Equestria are tripping over themselves to make deposits. Naturally, every outlaw and villain worth their oats is gonna want a piece of that!

It's your job as the Sheriff to defend the bank by defeating the bandits and letting the good ponies go about their business unharmed.

By the way, there's a rumor going around that the lovely scent of all those apple pies has attracted a swarm of adorable, but dangerous creatures...

This game is based on the classic Sega arcade game, Bank Panic.

This game uses only the keyboard to play.

Collect a money bag from each door to complete the level.

Use the arrow keys to move left and right. You can only move when all doors are closed.

Use A, S and D to shoot. A shoots towards the left door, S shoots the middle door and D the right.

Since this game is most likely to have more than a few bugs, make sure to report them and I'll fix them asap. The game might not save highscores between updates in the HTML version, but it should in the downloadable version.

Thanks to Equestria Gaming for the article!

Thanks to Equestria Daily too!!

Mostly just little QoL stuff and bugfixes. You can now exit a stage and return to the main menu, and change to windowed mode in the downloaded version. Also, the credits song is now in higher quality!!

HTML version hopefully fixed for good. A few other bugfixes and there's a sound effect for when you miss.

For the second level, the robbers will sometimes doge the pie that I throw,  how do I get them out anyways ? Is it just that I'm forced to die right then or ? Also when they have that angry face on in the second level and throw the pie but I can't do anything to stop it ?? Hgelp me

If they dodge, you just gotta keep throwing pies at them, you'll hit them eventually. As for the angry bandits, you just have to be very quick!!

OMG I GOT A HIGH SCORE AAAA TWIPEE SHARTKLE FOR THE WIN !!!

Thanks for playing! Congrats, but only the chosen ones get to see the ending of the game..

This is really cool and fun, but I have no idea on how to actually collect the money. Do I just stand there or like ???

oh wait nevermind I got it now, this is so fun !!

Love it, simple arcade game but with ponys.

I was a big fan of Sega's Bank Panic.  I don't know if the web version is slower of I've gotten slower.  The re-theme is silly fun. 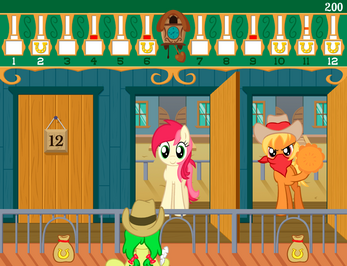